Dearly beloved, we are gathered here today to pay tribute and respect to one False Aralia better known as Houseplant #4…… 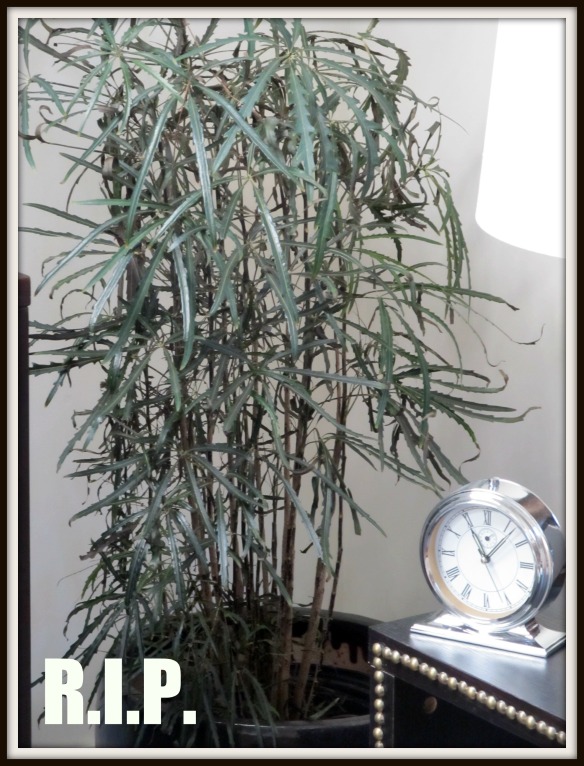 Houseplant #4 you deserved better.  The odds were stacked up against you worse than being born into the Lohan family.  The day I bought you, your destiny was to die.  As morbid as it sounds, you were doomed from the day I laid eyes on you.

You were such a beautiful plant – full of life (and leaves).  A soft breeze would make you rustle with delight.  You grew full and strong — your leaves shiny.  Your leaves….like Madonna’s endless parade of young Latin lovers……were your shining glory.  Deep green and variegated, they were a pleasure to behold.

Now you are just a shell of yourself.  Much like a Whitney Houston record after 2000, you are basking in the glow of former glories.  I think the best I can do is give you your proper respects and place you to rest.

Go to that big nursery in the sky — your road was hard and you have earned your reward.  I pray that you find the sunlight & fertilizer you so desperately needed here on Earth.  Sleep the everlasting sleep my sweet Houseplant #4.  You put up a good fight…..

(okay I am off to find my next victim….have a great weekend.)

Last year I decided to make a terrarium and was quite pleased with myself….. 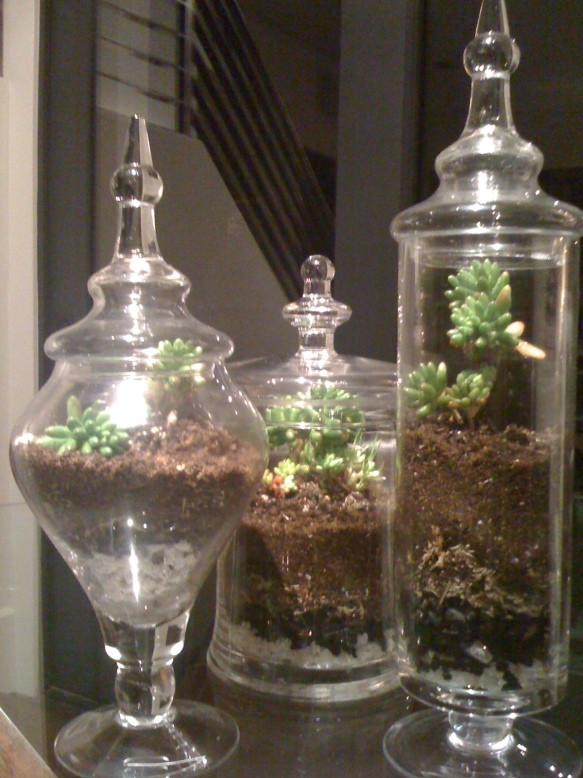 As I have said before and I will say again, I have not met a plant, living or fake, that I cannot kill.  I am the Terminator when it comes to flora.  With that said, I decided to venture into the world of terrariums one more time but this time with help.

I recently finished a contributing post to Centsational Girl about modern terrariums (which is live today – so click over and check it out).  As part of the post, I interviewed two fantastic ladies who are terrarium experts and from our conversations received some fantastic assistance on how to make my new terrarium better, faster, stronger — sorta like a Bionic Terrarium (insert Six Million Dollar Man and/or Bionic Woman joke here…). 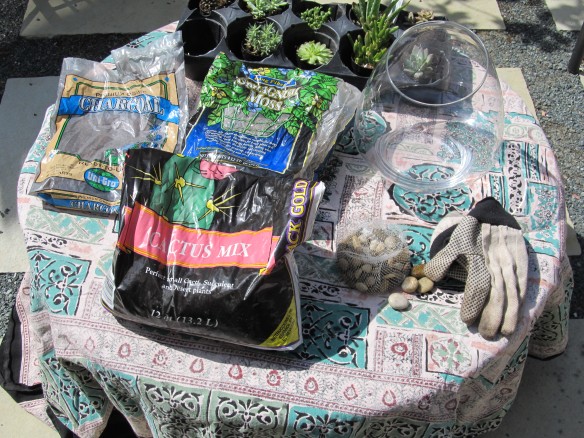 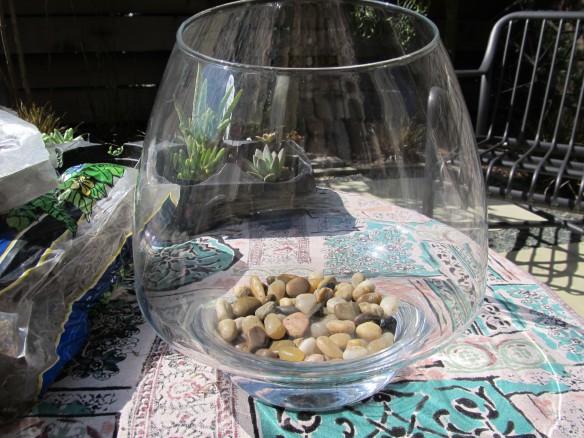 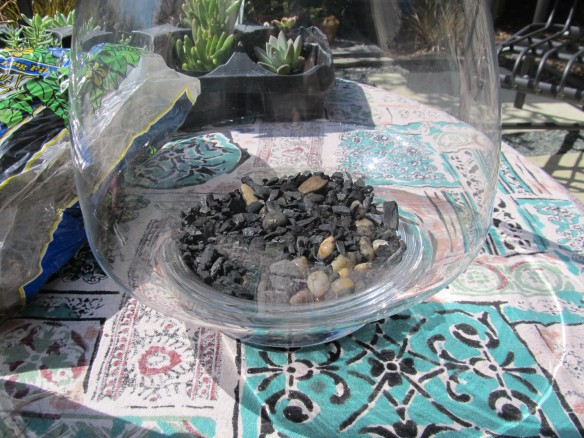 Add a layer of charcoal over rocks to combat mold, smell & bacteria 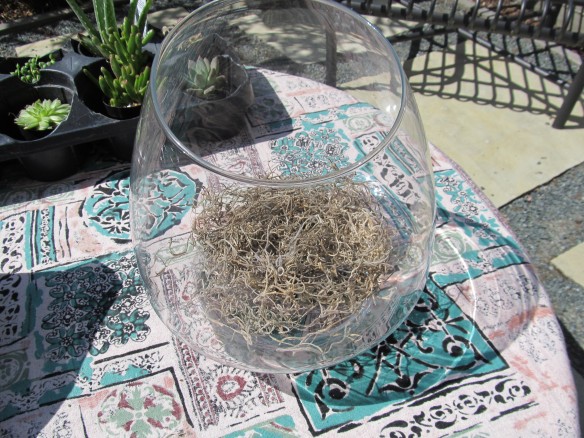 Add a layer of moss to help with soil erosion 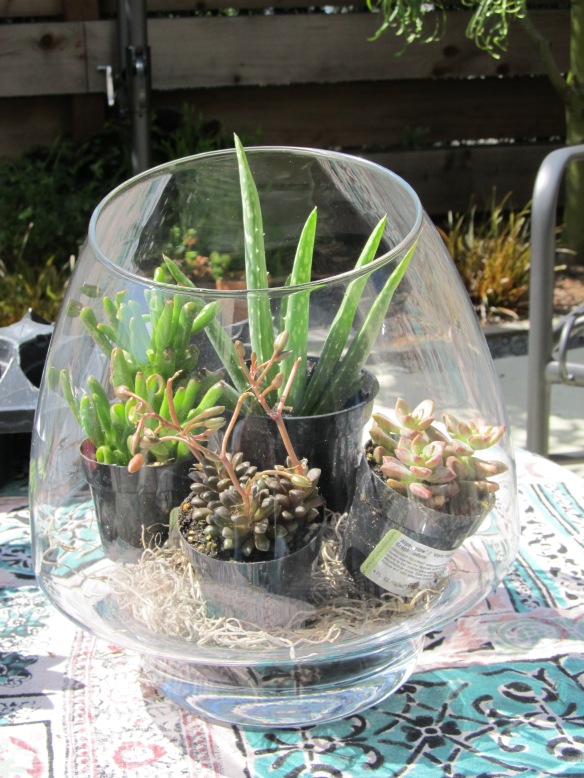 Add a layer of soil on top of moss 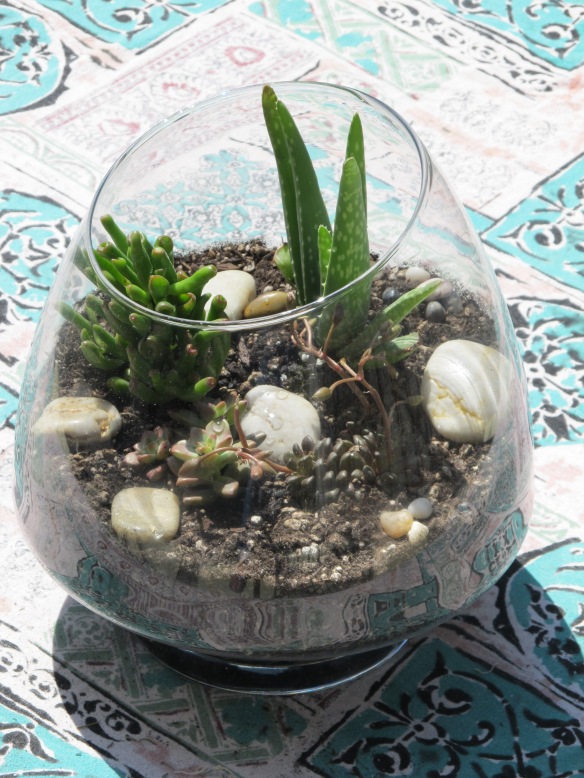 Add plants and fill in with additional soil, rocks and decorations 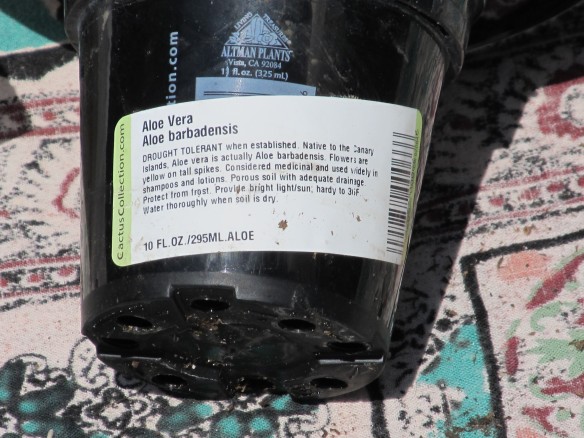 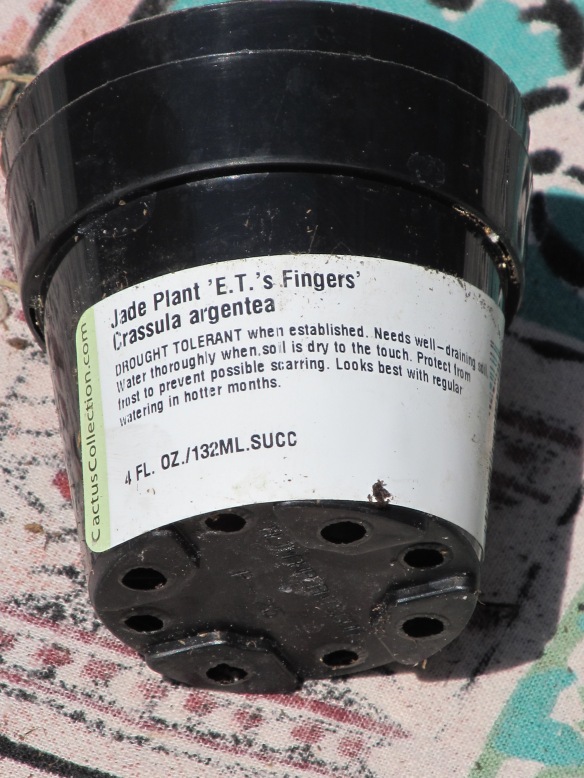 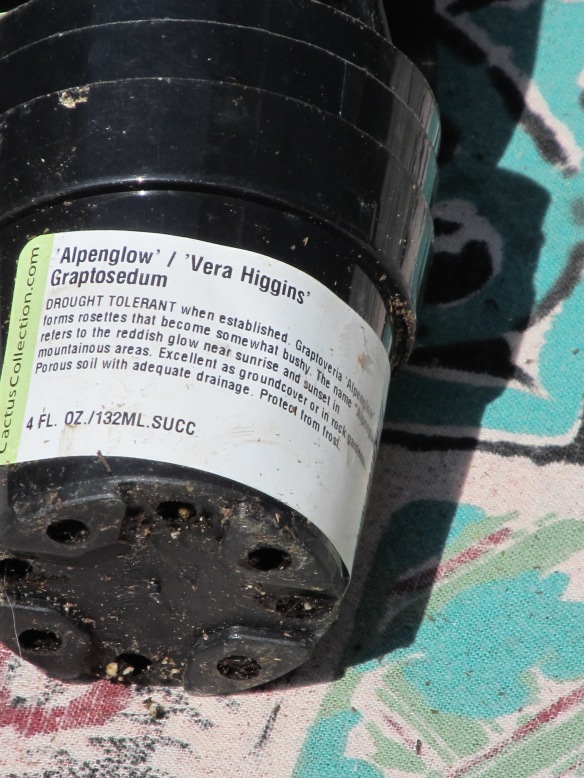 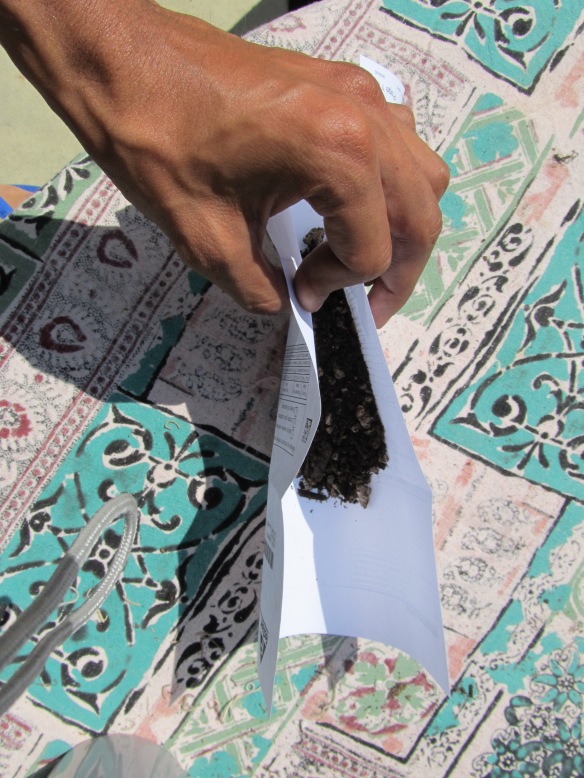 Fancy tool I used to fill in soil around plants

To fill soil around the cacti I made a simple funnel out of a piece of paper.  It allowed me to get soil exactly where I wanted without getting it all over the plants. 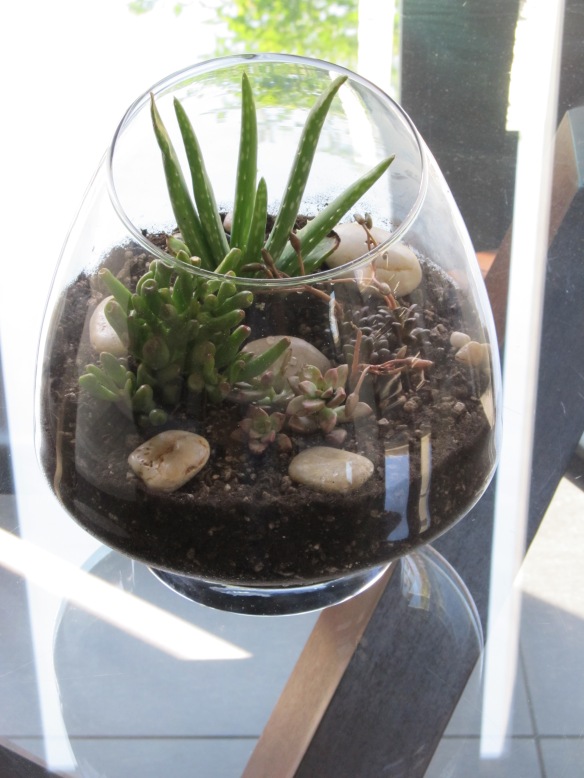 I still need to add a layer of decorative rocks/sand and a small memento , but I am quite happy with how it turned out.  I love the shape of the vessel and it was a steal from Marshall’s for only $9.99.  Fingers crossed that this one survives!

Special thanks to Monica Schaefer of Paxton Gates and Bianca D’Amico of Terri Planty for all their insight and assistance!

As part of the patio “make over” we had a planter box built on top of a cement retaining wall.  The goal is to grow some type of hanging, trailing, meandering vine that will hide the wall over time.

We initially tried sweet potato vines at the base of the wall, but due to the wall’s orientation we could not make those darn things grow.  The soil in front of the wall is fairly shallow combined with limited natural light, the sweet potato vines were sorta doomed from the start  I think.

So now we have ripped them out and are back at square one.  After doing some research, I think we have settled on a few different options: 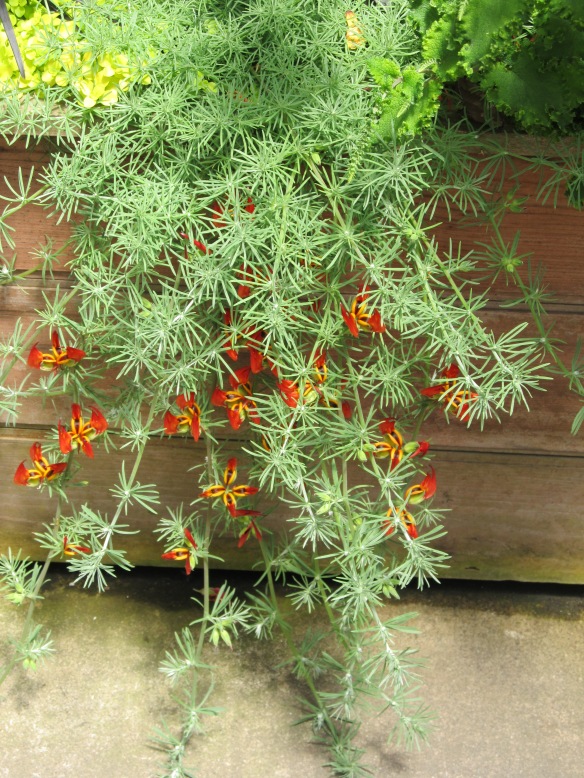 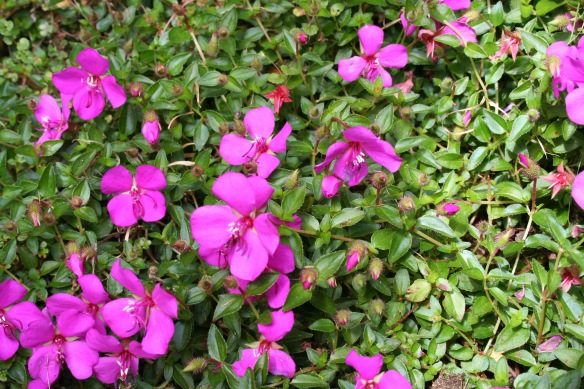 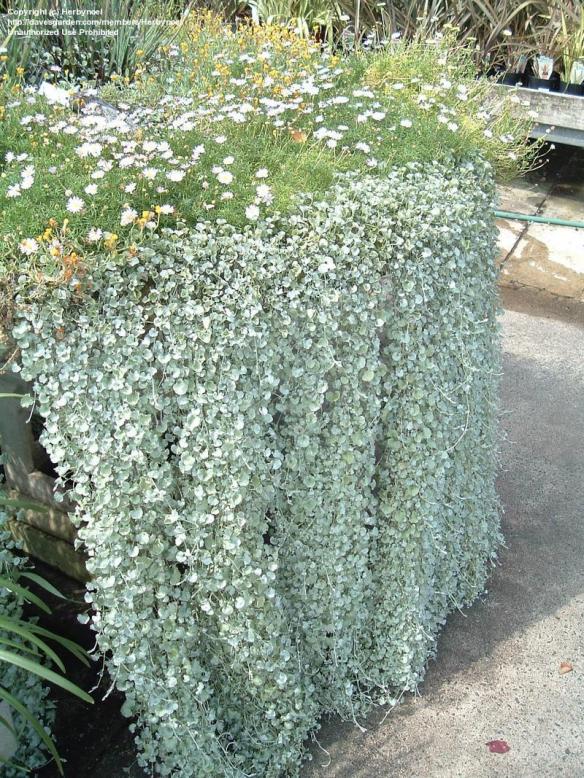 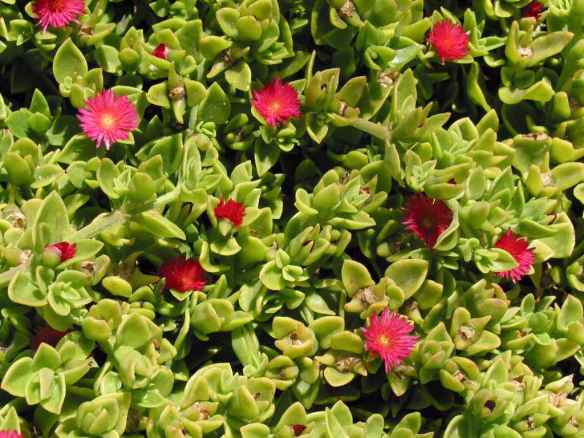 Each of the plants according to the nursery as well as the online gardening blogs do well in part sun/part shade, need only about 8-12 inches of soil to fully blossom and are drought tolerant once established.

While I love the orange flowers and unique leaves of the Parrot’s Beak, I am concerned that it may not be as hardy as they nursery makes it out to be.  In addition, the Spanish Shawl has a drop of about 2-3 feet which would leave about 3 feet of exposed wall and covering the concrete is a major reason we installed the planter box.

So that brings me to the Aptenia Cordifolia and the Silver Falls.  To be upfront, I already own both of these plants and love each for different reasons.  The Silver Falls is currently in the pots at the front of the house and provides a beautiful silvery green cascade of foliage down one of the pots.  However, the vines are a tad too delicate for my liking.  On several occasions I have snagged my bag on them and broken off segments.  Considering that the planter box is next to a high traffic area, I am concerned that the vines won’t stand up to be being constantly brushed against.

That leaves us with the Aptenia Cordifolia which is actually a ground cover but can be used in hanging pots and planters.  In the same family as succulents, the vines are a bright green with pink flowers during the summer months.  It trails up to 4 feet and the vines are thick and sturdy.  An added bonus is that it propagates through cuttings.  Therefore, if a section dies, I can simply cut a piece off and replant it…. so it’s the plant that keeps giving!

And oh being the cheap wad I can be at times, Home Depot sells flats of the Aptenia for $13 while all the other plants are sold for about $4-$5 a pot.  If my calculations are correct, I would only need 2 flats to fill the planter while I would need about 8-12 pots for the others.

With all this being said, it seems like I have a front-runner with the Aptenia Cordifolia.  What do you all think?  Any suggestions for trailing vines? Any of you have these plants in your own yard?  Leave a comment and tell me your experiences or thoughts!

It’s no secret that I regularly kill plants of all shapes, sizes and varieties.  The only success I have had to date has been with succulents and even then I have come close to killing a few.  Thankfully, the succulent container garden I planted earlier this year is growing beautifully and with warmer weather approaching should explode with color as its flowers bloom.  However, the same can’t be said for my orchids who all bit the dust about the same time.  It was like  mass suicide….they all bit it within a span of 24 hours!

So for the moment, I am done with orchids but I still like having greenery in the house.  I knew I didn’t want ferns and replacing cut flowers on a weekly basis is a tad expensive, so I was at a loss as what to do.  Pondering my plight, my eyes fell upon this marble urn that sits on my bedside table…. 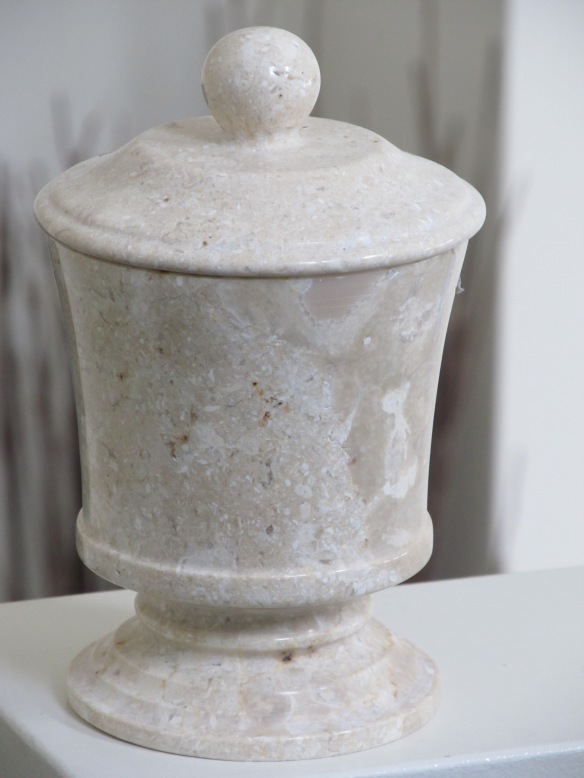 Originally designed to hold bathroom sundries, I bought it at Home Goods for around $5 as a bit of “bling”.  Seeing the urn made me realize that it would make the perfect planter for a miniature succulent.  Carrying with the theme, I made a quick run to Home Goods and luckily for me, they had three different sized marble containers for which I paid a total of $20, about the price I would pay for a nice pot, or so how I justified this random shopping urge.

Fortunately, I had a credit at Home Depot and was able to purchase three very adorable mini succulents for $1.98 each.  Once home, the project took about 30 minutes to complete thanks to the addition of some extra potting soil.  I think they turned out really well…..

After filling in the sides of the containers with extra potting soil, I was left with the issue of having soil in all the nooks of the succulents which was not exactly the look I was going for.   Remembering a trick from my event planning days, I pulled out a small artist brush and gently brushed the dirt off the leaves — worked like a charm! 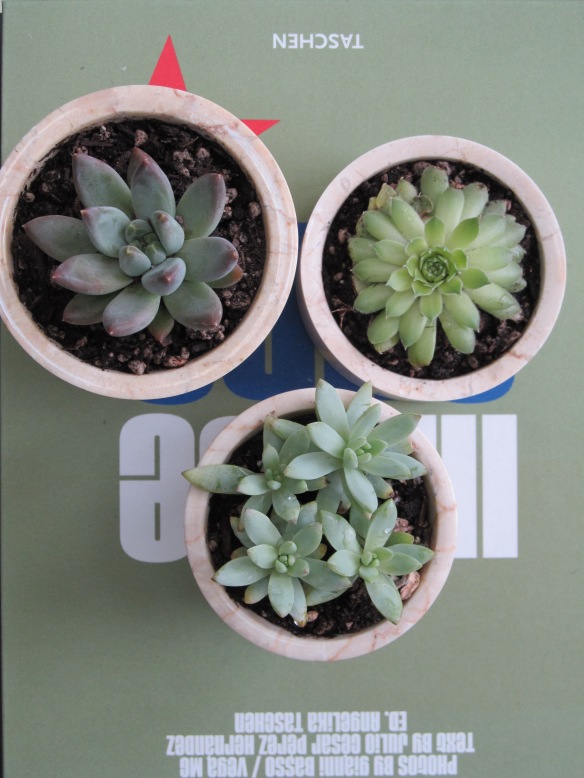 Right now, they will reside on my coffee table until I find a more suitable spot, but then, I just may leave them there.  They can’t fare any worse than their orchid brethren…… 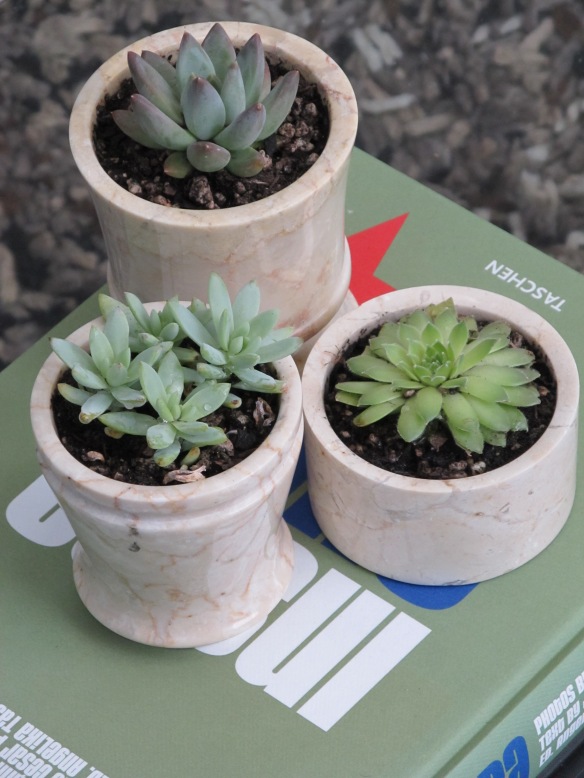 Now I just have to figure out what to do with the tops that came with the containers.  Suggestions for a nifty DIY project for the tops would be appreciated!  Leave your ideas in the comments section or shoot me an email.

I am off to attach trim to the curtains — it will either look awesome or like crap.  Isn’t it funny that the divide between these two extremes can be so small at times?

So y’all know I have a criminal past right? I am not proud to say, but I have committed murder….well of plants. I have been known to kill plants on a regular basis. I go through plants like Madonna goes through young Latin boyfriends, which means by the truckload! In particular, every plant I bring into my master bedroom dies a slow and painful death. Case in point: 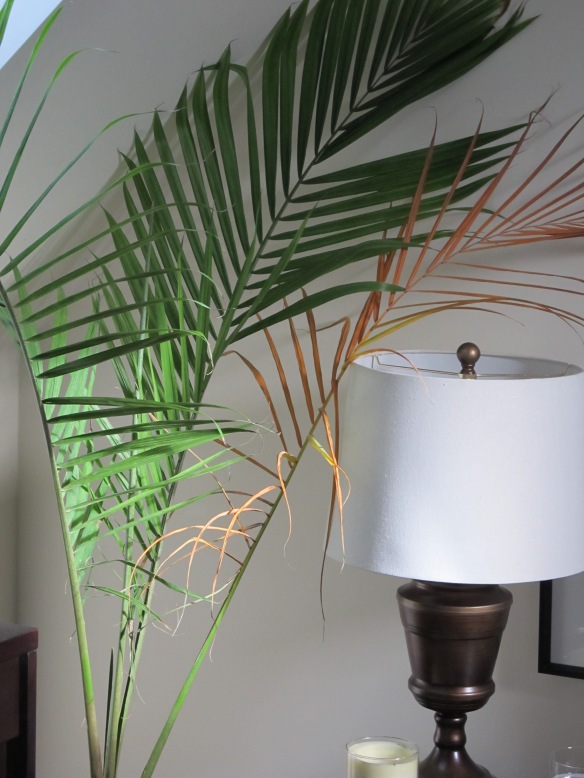 See the frond to the right. Deader than a door nail. Deader than Charlie Sheen’s acting career. Dead. So my question is…do you think that my lamp may have killed that frond? Or has my black thumb struck again? Second, do you all have any suggestions for large plants that may tolerate my abuse? I have tried various fig trees, ficus, orchids and ferns — all of which bit the dust. I even “killed” a fake tree — long story but it involves trying to string lights, fire hazard and almost burning down the house. In hindsight, I think the last was a mercy killing since I am not fond of faux greenery.

In any case, any and all tips and feedback is appreciated!

Note: Don’t forget to enter the April Give Away for your chance to win my Easter tablescape!

Hi! I am Courtney. I love interior design, food and all things stylish. Join me on my adventures as I search out bargains, test out recipes and transform my thrift store finds. Just remember, it doesn't need to cost a fortune to look like a million bucks!

I love receiving email, so shoot me one at lifeoutloudmail(@)gmail.com. 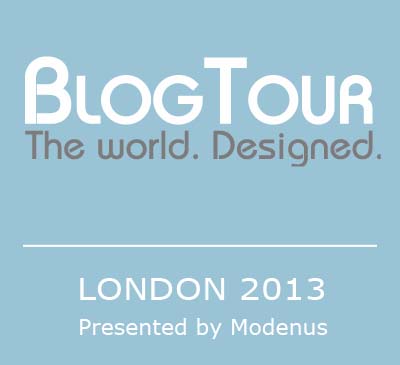