The art I originally had hanging in the 1st floor powder room was less than inspiring.  It was an Ikea “original”…clearly no one else has a Ribba frame with a close-up picture of a flower in black-and-white.  Nope.  I am the only one.  I am positive of it…..

So needless to say I was itching to get something new to hang above the toilet.  However, with limited funds and an awkward space, it was not an easy task.  Taking all of this into consideration, I threw caution to the wind and decided to make my own art.  Actually, I decided to make art for the music room, but it didn’t quite work in the room, but with a few quick modifications, the pieces turned out great in their new home.

Six years ago when The Partner and I moved to California, we lived in a fairly generic apartment in Mountain View to be close to his medical residency at Stanford.  The apartment was large, clean and centrally located between CalTrain and downtown Mountain View.  It also had the personality of a wet noodle.  So I did my best to warm it up and make it home including creating a series of canvas art pieces that depicted the word “home” in different languages.

Two moves later, that art project sat in our garage gathering dust.  I used the canvases as test boards for different paint projects and to prop up different things that needed spray painting, but otherwise they just sat unused.  Well inspiration comes in different shapes and forms and mine came in the form of dust.  Since the boards had been sitting in the garage for so long, they had accumulated a layer of dust on them about a quarter of an inch thick (gross huh?).  As I said, I used the canvases to prop stuff up that needs spray painting and after doing that several times, I looked at the boards the other day and saw that they had this cool textured effect going on.

Inspired, I figured I could recreate a similar look with something less gross than dirt and dust.  After some trial and error, I did figure it out and this is how I did it: 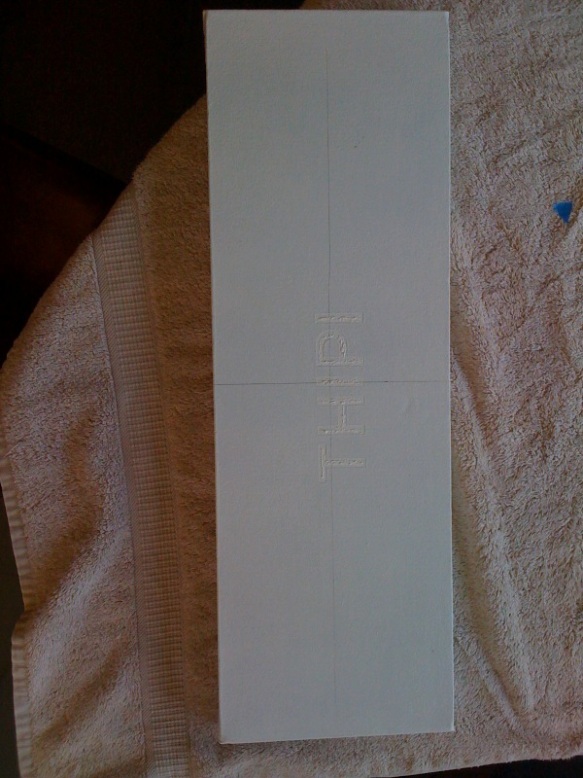 The canvas was originally painted red, so I had to cover the color using a good primer.  We had white Zinsser primer from other house projects, so that is what I used.  It took about 2-3 coats to get even and complete coverage.  You can still see where I stenciled the word “thipi” into the canvas for the old art project.

After the primer dried, I measured and marked the center of the canvas.  I then toyed with different ideas for the central theme of the piece and decided to stay simple and go geometric since the canvas was already a rectangle.  Now with that decided, I needed to test out my theory on how I was going to add texture to the painting.  In my walks through Michaels and Blick’s I had seen ceramic additive that allows the user to create texture and depth but at between $6 to $9 a jar and having now idea how to use it, I passed.  However, I thought that I could recreate the effect using spackle. 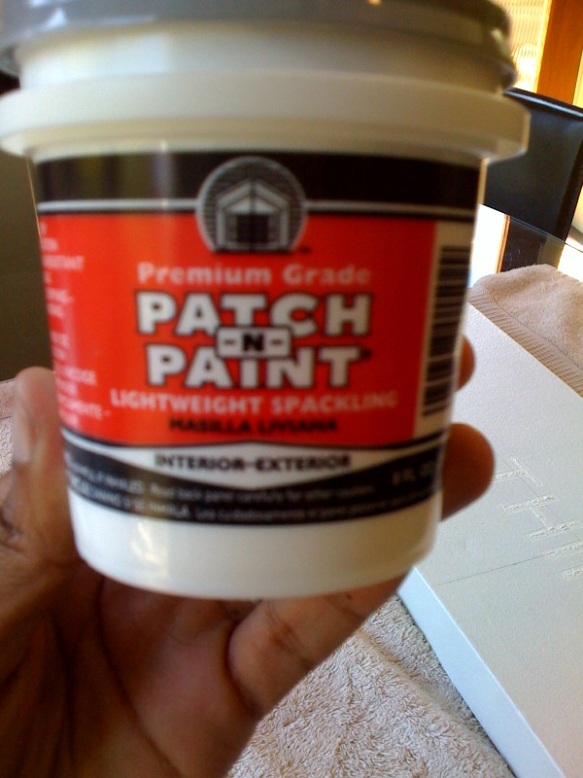 Using tape, I taped off my geometric patter onto the canvas using the guidelines I had previously drawn to ensure that it was centered.  Once taped, I applied a thin amount of spackle using a spackle knife and played with the patterns within the wet spackle.  If I didn’t like something, I just smoothed it out and started over.  Since this was quick drying spackle, I had about a 15 minute window before things started to set.

Not so pretty right now, but it will shortly.....

Once I had the desired effect in the wet spackle, I peeled off my tape.  This is an important step…if you do not remove the tape while the spackle is wet, you run the risk of cracking your patterning or not being able to remove the tape at all.

I waited 45 minutes to let the spackle dry and sprayed the entire piece with a flat white spray paint that I had in the house.  I did this for three reasons: (1) I need to cover my guidelines on the canvas, (2) the spray paint added an extra layer of strength to the spackle for when I painted it and (3) it provided me with an even starting point ensuring that whatever paint I used would have a good primer to start with.  Once the piece was sprayed, I left it to dry overnight .The next morning, I used the leftover Ralph Lauren metallic paint (Iron Gate) to paint the spackle part of the canvas with a sponge brush to get into the crevices, leaving the rest of the canvas the flat white.  I let the first coat dry.  As it was drying, I taped the white parts of the canvas to protect them.  I then went over the metallic paint with a light dusting of Rust-o-leum Navy spray paint in gloss.  The piece got three light dustings of the spray paint to get my desired effect. 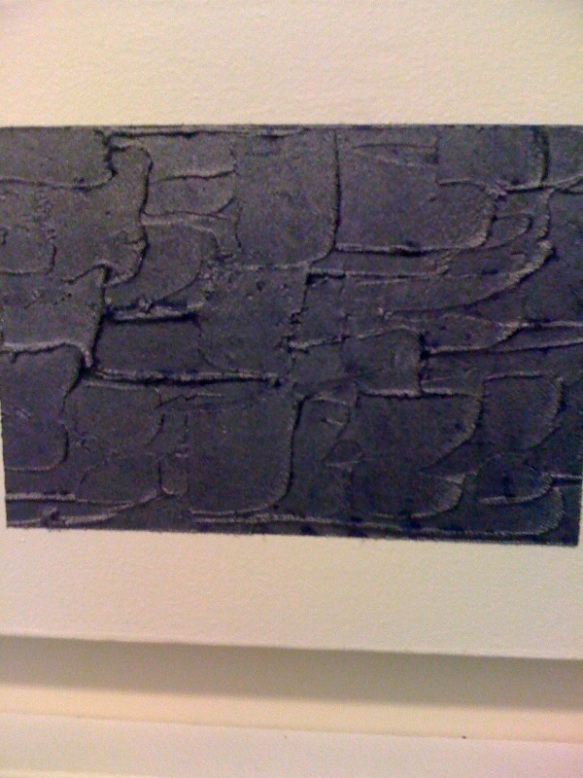 Close up of project with three light coats of spray paint

I loved how the metallic paint shimmered through the navy spray paint.  It was the 3-D effect I was hoping for as it highlights the peaks and valleys of the spackle.  The flat white background really makes the areas that were painted and spackled really pop off the canvas. I repeated the process on a second canvas and ended up with two pieces of cool art for about $3 which was the cost of the spray paint since I had everything else already in the house from previous projects.

Both canvases hung together....

I am still contemplating painting out the canvases fully with the metallic paint, but for right now, I am happy with the stark white.  I don’t think they are that bad for $1.50 each……What do you think?